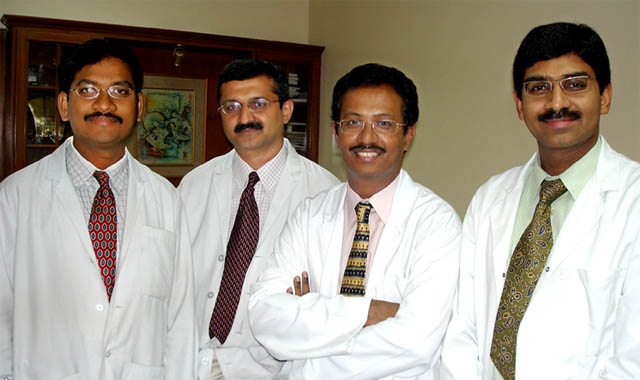 Ganga Hospital became the first centre in the country to win the ISSLS Spine research award. ISSLS refers to International Society for Study of Lumbar Spine. This scientific body is a select group of spine specialists that strive for high quality research in the field of lumbar spine diseases. It acknowledges extraordinary research that enriches the existing knowledge on various unanswered queries of lumbar spine patho-anatomy and patho-physiology. This year, the award was given to a research from the Spine unit of Ganga Hospital led by Dr S Rajasekaran. The other members of the research team were Dr J.NareshBabu, Dr R.Arun, Dr B.Roy Wilson Armstrong, Dr Ajoy Prasad Shetty and Dr S Murugan. The topic of the work was "A Study of Diffusion in Human Lumbar Discs: A Serial Magnetic Resonance Imaging Study Documenting the Inﬂuence of the Endplate on Diffusion in Normal and Degenerate Discs".Site-specific endplate damages have been documented to occur from early age in cadaveric studies. Although postulated as an important mechanism for disc degeneration, no method has been described so far to identify such breaks in vivo. MRI T1-weighted images were obtained pre and post-contrast with Gadodiamide at 5, 10mts, 2, 4, 6,12 & 24hours. Diffusion was calculated by measuring signal intensity values in vertebral body (VB), subchondral bone (SCB), endplate, center (CNP) and periphery (PNP) of nucleus pulposus (NP). Enhancement percentage (EP) for each time period, Peak enhancement percentage (PEP) and time taken to achieve PEP (Tmax) were used to study diffusion characteristics of each region. Intact endplate was identified in pre-contrast images as a distinct zone hypo-intense to SCB and NP by at least 75 units. Post-contrast, the normal pattern was that there was a sequential achievement of PEP from VB to CNP (Diffusion march) with a delay (endplate delay) at the endplate (Tmax for VB & SCB was 10min, Endplate was 2hrs and NP was 6hrs). Endplate breaks were identified as patchy areas, where there was simultaneous enhancement of SCB, endplate and PNP at 10 min (absence of endplate delay and Diffusion march). This study gave important insights into the understanding of importance of vertebral end plate in the nutrition of the intervertebral disc.