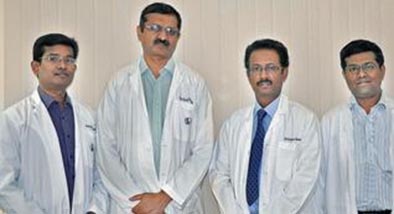 Research by a team of spine surgeons from our hospital has found that 60 per cent of instances of spinal disc prolapse happen because of avulsion (tearing away) of the bone and ligament junction, as against the traditional belief that it is caused by the tear of the annulus fibrosus – a thick fibrous capsule that covers the lumbar disc. The research has fetched the team the ISSLS Award, instituted by the International Society for Study of Lumbar Spine.The normal lumbar disc has a jelly-like substance in the centre, which is enclosed by a thin cartilage plate at the junction with the bone and by a thick fibrous capsule called the annulus fibrosus.Traditionally, it was believed that a disc bulged due to the weakening of the annulus fibrosus and when this tore it led to a complete prolapse.The annulus fibrosus is formed by many layers of collagen and fibrous tissues and hence there has been a lot of research at the micro and molecular levels on its nature, biochemical content and also the nature of collagen and fibrous tissue.There has also been lot of studies through gene therapy and tissue engineering to strengthen the annulus fibrosus, according to S. Rajasekaran, Chairman of the Department of Spine Surgery of Ganga Hospital, who led the research. The other members of the team are Ajoy Shetty, Rishi Kanna and V. Tubaki.The spine team of this hospital won the ISSLS Award in 2004 and 2010 for researches into spinal problems. The International Society for the Study of the Lumbar Spine was founded in 1974 to bring together all researchers throughout the world who have richly contributed to understanding the lumbar spine.The traditional belief about how the prolapse occurred was based on animal and cadaver studies. The latest finding was based on the study of patients who complained of problems and underwent treatment. The research titled 'The Anatomy of Failure in Lumbar Disc Herniations in Humans' involved careful study of 189 patients, trying to locate the initial point of failure. High definition radiological studies revealed a tearing away of the end plate at the ligament-bone junction in nearly 60 per cent of the patients. Contrary to the traditional belief that the disc fails by a tear in the annulus fibrosus, the team found that failure by bony avulsion (tearing away) of the ligament bone junction is more common. This was confirmed by intraoperative findings during microdiscectomy surgery. Serial histopathology sections of the prolapsed disc also proved this.