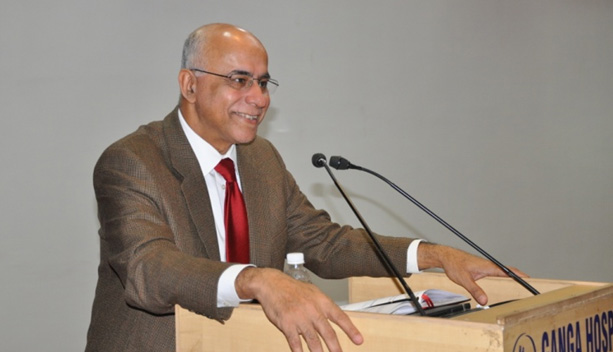 On Nov 12,2013, Mr Subroto Bagchi Chairman, Mind Tree, Bangalore visited Ganga Hospital and spoke to the doctors and other staff about Breakthrough Growth and Scaling. Dr Bagchi born in May 31, 1957 is an Indian entrepreneur and business leader. Bagchi was born in Patnagarh, Odisha, and grew up mostly in the tribal districts of Odisha. He is best known for co-founding Mindtree Ltd and for being a business author. Between 1999 and 2007, he was instrumental in articulating Mindtree’s mission, vision and values. He led leadership development, marketing and knowledge management initiatives that differentiated the company from the beginning. Mindtree’s distinctive physical locations reflect his thought leadership. He is also the face of the company’s outreach beyond business. In 2010, he was appointed vice chairman to the Board. On April 1, 2012, he assumed the office of Chairman.

Along the way, Bagchi also wrote business bestsellers such as The High Performance Entrepreneur, Go Kiss the World, The Professional, MBA at 16, The Professional Companion and The Elephant Catchers. His books have been translated into several languages like Hindi, Marathi, Malayalam, Kannada, Tamil, Korean and Chinese. Bagchi periodically writes a column titled Zen Garden for Forbes India for which he has interviewed people like the Dalai Lama, Aamir Khan, Cherie Blair and many noted Indian entrepreneurs. At Ganga Hospital, he had an interesting discussion with all the staff and the programme was thoroughly enjoyed.